A seed planted in fertile soil sprouts into a tree that is strong, robust and lush. It takes dedication, passion, care, time and attention. 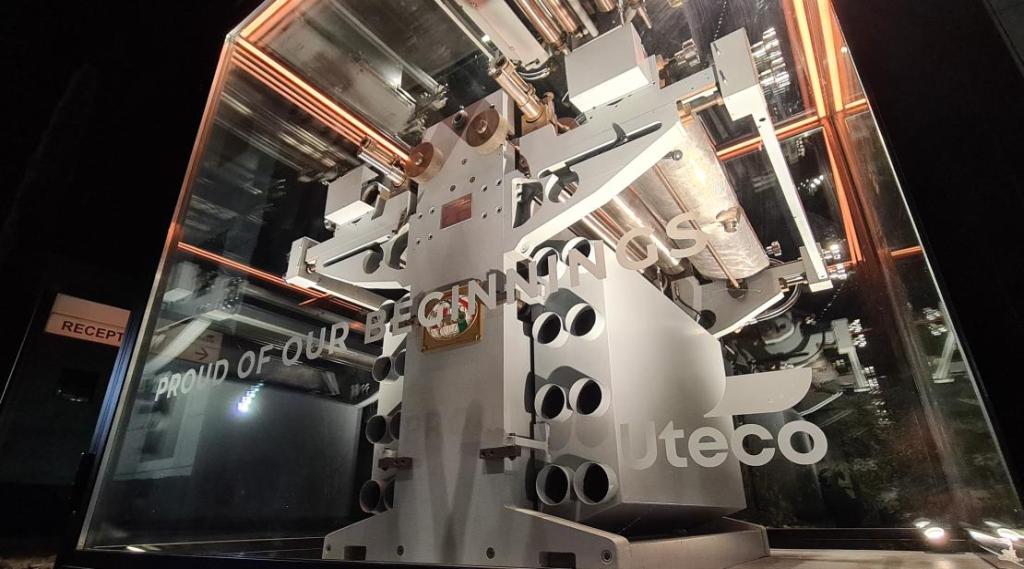 In 1985, in San Martino Buon Albergo, a seed that generated strong and steadfast roots was planted in a small company that was just born: Uteco International. At the time, establishing itself in the flexographic printing industry was not easy because the inks used until the 1950s were considered toxic. Despite the lack of precision offered by offset technology, the sector of industrial printing began to grow in the second half of the 1980s.

At that moment Uteco International was able to contribute to progress of flexographic printing, optimizing its technologies and improving its characteristics.

In the spring of 1985, the work of five people paid off resulting in the order for the first two-color stack type flexogaphic printing machine, the Bronze 212 - a name that would soon become synonymous with guarantee.

Bronze has, in fact, a very profound cultural meaning: it’s not only the material with which the medal destined for third place in sports competitions is made, but it is also the material with which precious objects, tools and weapons were made in ancient times. It is a light but resistant alloy, which has made it possible to create majestic works that have reached the present day still intact. The two-color Bronze 212 wants to represent these values: lightness, excellent quality and stability over time.

Uteco's mechanical technicians have undertaken to water this first seed, which has already become a root, day by day, creating four, six and eight-color printing systems, named following the nobility scale of precious metals: Silver, Gold and Platinum respectively. After a few years this nomenclature was lost, classifying all flexographic printing systems as "Gold", while maintaining the original numbering in which the first digit indicated the number of colors and the other two numbers represented the format of the printing system.

The first line of Uteco flexographic machines was designed to be mounted in a direct line to an
extruder, allowing the film to be printed in reverse register in order to make plastic bags. Cartenplast, the first Uteco customer, chose the Bronze 212 because it was the only flexographic machine capable of responding to the increasingly demanding market demands. The mechanical and electronic solutions and devices introduced by Uteco were certainly to be considered innovative for those times, especially in terms of time reduction in job change operations.

First of all, the Bronze 212 was based on a gear system, which provided for the advancement of the anilox cylinder and plate holder simultaneously and independently, as well as the continuous movement of the inking cylinders with the machine stopped by means of a hydraulic motor. All the machines sold in line to the extruder had, at the time, a dancing roller that synchronized the speed of the machine with the speed of the extruder itself. This flexographic system was also equipped with a manual transversal register, with a maximum width of 20 mm, and a sensor for breaking the film placed before the printing unit. The latest innovation brought by Bronze consisted of an improved drying capacity with new boxes for drying the printed support.

Even then, Uteco was considered an innovative, cutting-edge and technological company. Remembering where we started from wants to express, in our case, strong gratitude to the people who have allowed us to grow skills that have led us, today to be a leader in the sector of converting.

The paths traveled, the difficulties encountered and the deserved successes make our company unique and special every single person who contributed to these successes. Every day we treasure our past, our roots and the immense work started in 1985 by those five employees.